Previously, we released our take on Curbside Banking, a supplement to the previously released “Branch Design After COVID-19” Guide Book. Both have been incredibly well-received and we’re grateful for all who have read it and reached out to us to learn more.

Within the Curbside Banking supplement, we introduced a new Micro Branch concept. While we have done previous posts on Micro Branches, we thought we would return to this topic. This time we’ll focus on 3 underlying strategies that are often overlooked when considering going small.

First, in Part 1, we are going to begin with the “Network Effect.” What is the Network Effect? Funny you should ask, that’s what we’re here to talk about.

The traditional economist states that the more people use something, the more valuable that it becomes.

In the retail banking world, Bancography states the following:

In other retail terms, it answers the question of why there is always Starbucks across the street from every Starbucks. When you see one on every corner, you start to want Starbucks. Saturating a market with brick and mortar has an exponential growth metric attributed to that strategy.

So, let’s now bring this back to your Retail Branch growth strategy and how the Micro Branch plays a role.

When you operate a network of branches in a given market, there is an assumed volume of Loans and Deposits that are up for grabs. When we run our consulting engagements, we estimate a Market or Trade Area’s total forecastable Loans and Deposits volume. From here, we estimate what your “fair share” is and what is also available. This availability is where your branch expansion plans come in.

While building several full-scale, standalone branches is ideal, this is not always feasible. Do you lack the available capital for a series of additional free standing branches, but want to capitalize on the Network Effect? A Micro Branch may very well be the perfect answer. 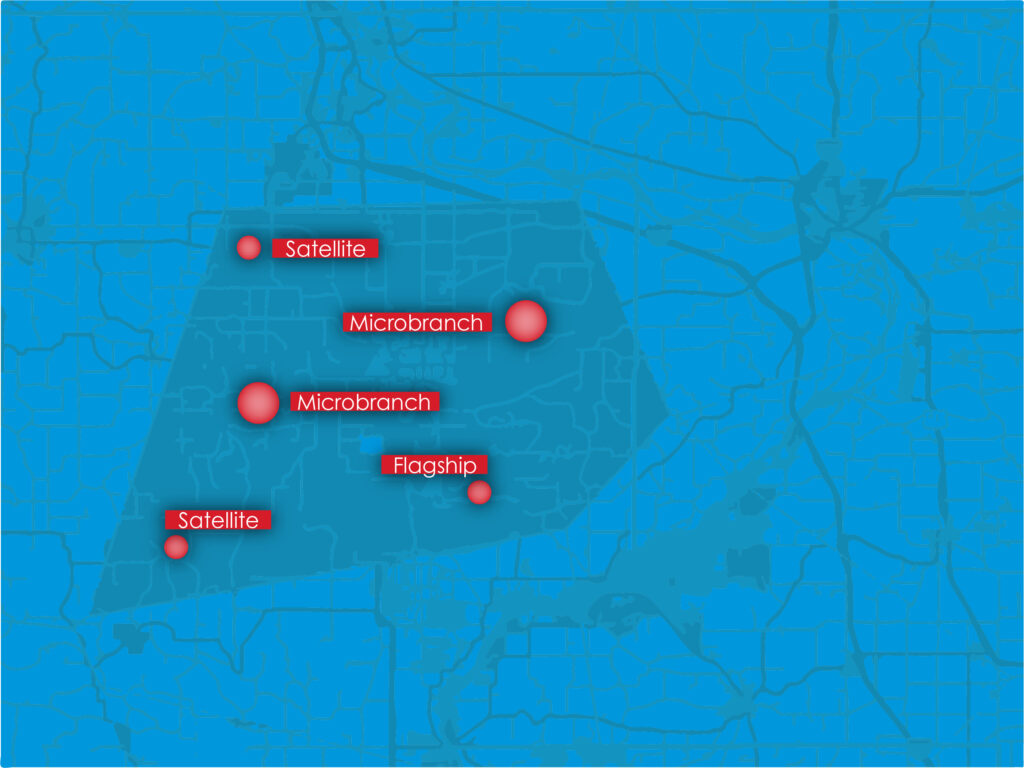 A Micro Branch can often cost 1/3rd the price of a free standing branch, yet allows you to further penetrate and saturate a market. This addition of low-cost brick and mortar locations allows you to expand your brand, serve your customers/members, and grab available Loans and Deposits in that market. A compounding effect will take place with each additional location because of the Network Effect. This will aid the percent increase of those Loans and Deposits at the locations already in existence.

Now onto Part 2, where we’ll go beyond the single market notion of the “Network Effect” and discuss an expanded concept. We’ll debate whether or not it makes sense to enter a new market and how the Micro Branch plays a role in this decision. Since this new, expanded version of the Network Effect doesn’t really have a name, we’ll call it the “Out of Network Effect.”

Many times, when we’re engaged in a Multi-Site Branch Growth Plan consulting engagement, we discuss geographic expansion strategies. A scenario always arises that proves to be a bit of a conundrum.

When we assess large, county-wide, or even state-wide geographies in an effort to find the best Trade Areas for branch expansion, there are some markets where the data implies a branch makes a lot of sense. Then, there are other Trade Areas that do not justify a fully staffed standalone branch.

This is where the Micro Branch comes into play – especially when considering the Out of Network Effect.

To further explain, I’ll use a recent example from a current client where this played out. I’ll be as specific as I can while maintaining our client’s privacy.

We recently executed a Multi-Site Branch Growth Plan where we looked at 4 cities across 4 counties. Each city represented the county seat, with one of these cities being a large metropolitan area. The remaining 3 cities were rural outposts with residents either working locally or commuting into the “big city.”

This is where the conundrum arose with City D. The data show that many employees and customers of this company live in City D. Yet, based on our Loans and Deposits forecasting, the data does not support a full standalone branch in City D.

But – the data does support a Micro Branch. 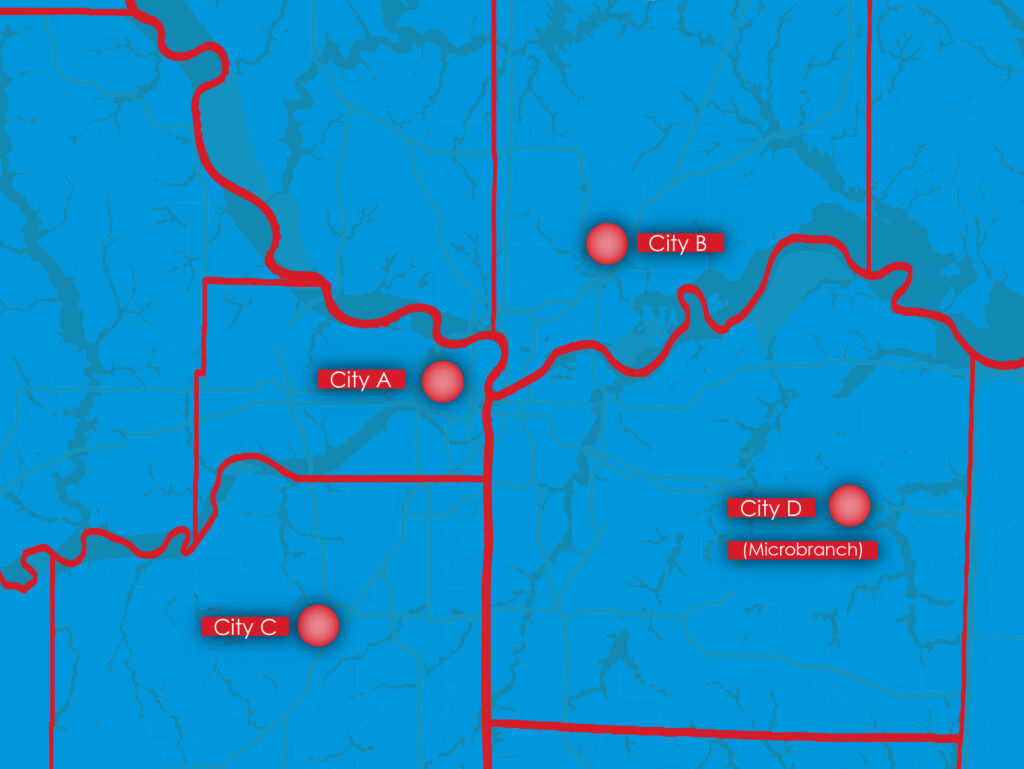 Executing a Micro Branch in City D is a win on several levels:

Here’s why a Micro Branch makes sense in this smaller town. If you think about it, the Network Effect states that there will be a total lift in sales (Loans & Deposits) in a given market by adding locations and aiding total saturation. This economic philosophy typically works for a confined market.

When you expand this to a rural, multi-county setting in addition to a dense metro market, the theory still holds. People who live in a tightly packed metro market need not venture more than a couple miles beyond their home’s radius. When you live in the country, however, you’re often driving across county lines. Wether it’s for a job, to see family, to get groceries, or visit specialty shops, it’s always a journey.

That’s why we did not recommend a standalone branch in City D, despite the client stating they wanted one. The data did not support it. Since we ran a proforma on a Micro Branch, however, the client got the branch they desired. Not only that, but all other branches in the quad-county analysis benefited from this single Micro Branch. Thus, the Out of Network Effect took hold.

Now here in Part 3, we’re going to revisit the concept of Hub & Spoke. This time, we’ll discuss how the Micro Branch can play an important role in executing this concept.

For visual purposes, we’re going to use a generic Market Area for Anytown, USA. These strategies can not only work for any given metro market, but can also be applied across a more rural, multi-county geography. 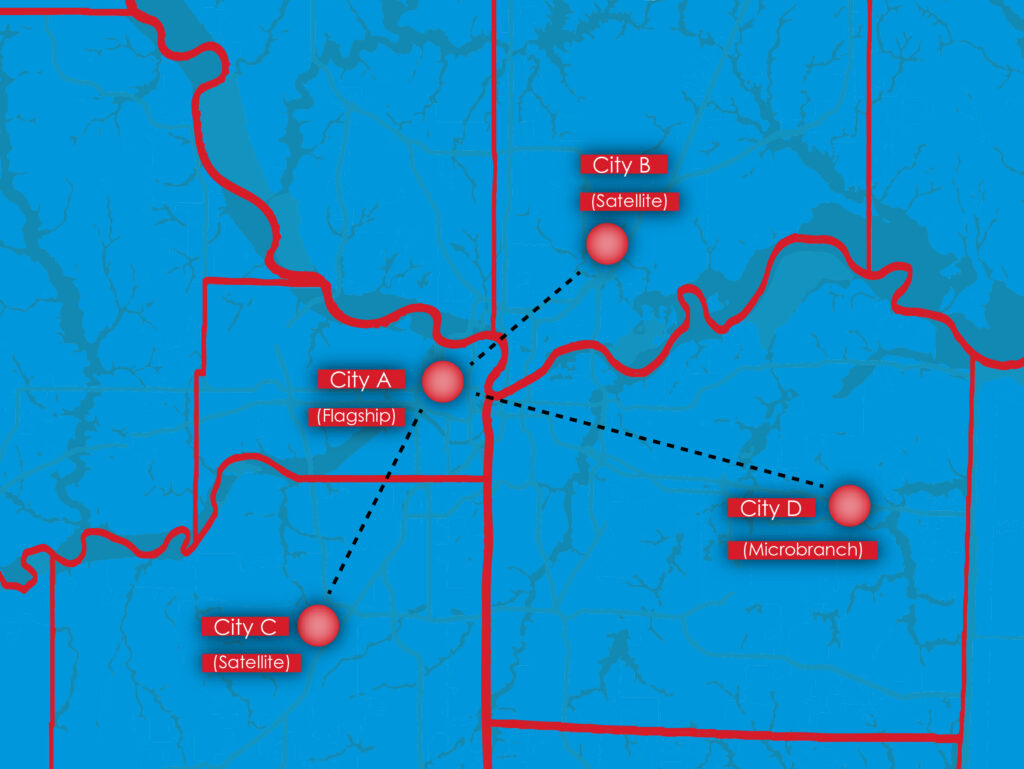 On the surface, the Hub & Spoke retail branch model implies you have your bigger branch as a central anchor (hub) to smaller, scattered satellite branches (spoke) across a given geography. Implying that Hub & Spoke is only about branch size, however, is missing the point.

When thought of strategically, the right Hub & Spoke model is about efficiencies while considering:

All of this is where having a Micro Branch as your wild card really comes into play.

When looking at the Hub & Spoke model across your branch network, your Hub is the flagship; the crowning achievement. It is the branch with the best design. It offers the most services, has best employees, and is either located in the optimal neighborhood or in the neighborhood with the best bragging rights (many traditional retailers put their flagship stores in Times Square (New York City), Union Square (San Francisco) or Magnificent Mile (Chicago)).

Your spokes are the soldier locations spread across the field. When the data doesn’t support a full branch in the outposts of your empire, the Micro Branch is ready to swoop in and fill the void.

The last point we’ll make here to close out this article and the series is this: the Hub & Spoke model actually has two sides.

To learn more about how Micro Branches can help you complete a well-rounded Hub & Spoke strategy, Contact Us today to learn about our Data Driven Consulting division and how the right branch strategy can help you double in size.